[This is the fifth in a series of lecture notes for the lab component of the core ‘Macroeconomics I’ course that I teach in the M.A. Economics programme at Ambedkar University, Delhi.]

In this session we will look at how to use the SciPy package to explore systems of differential equations.

At the beginning of your session run the following imports:

A system of differential equations is of the form

Usually there are many solutions to a differential equation system, and we need to impose additional conditions to pick a unique solution. For example, we may impose an initial condition

odeint expects that func will be a function whose first two arguments will be the current state \(x\) (which is in general n-dimensional) and time \(t\) respectively and which will return the right-hand side of the differential equation system (another n-dimensional vector). When using odeint we do not call f ourselves. Rather we provide it to odeint which calls it as required to compute the numerical solution.

Note that we have to define f as a function of both y and t even though we do not use t in the function as our differential equation system is autonomous. This is because odeint expects f to have a particular form.

The array t gives the time points for which we would like to know approximate values of the solution. For our experiment we choose five equally-spaces points between 0 and 1.

If you check after runnning the code above, y.ndim is 2 and y.shape is (6,1). In general the return value of odeint is two dimensional, with one row for each time point at which we asked for a solution and one column for each variable in our system.

Something new here. y[:,0] is a subscript operation, but instead of specifying a row by using an integer, we provide the special symbol : which in NumPy means all rows. And we provide 0 as the column number to pick only the first column. So we get a 1-d vector which just has the first column from each row.

In this example we chose a differential equation whose solution we can compute in terms of a formula. For the initial value \(y_0=1\) the solution is \(e^{-5t}\). If you want you can compute np.exp(-5*t) and compare the answer with the value y computed above. The numbers will not be exactly the same, since odeint does not know the exact formula and must compute an approximation, but they should be close.

Suppose we want to study the system

The Python code will be

We call the first argument to f as s to remind ourselves that it is the 2-element array containing the state of the system, with its first element s[0] being \(x\) and its second element s[1] being \(y\). We return the 2-element vector whose elements are \(dx/dt\) and \(dy/dt\). 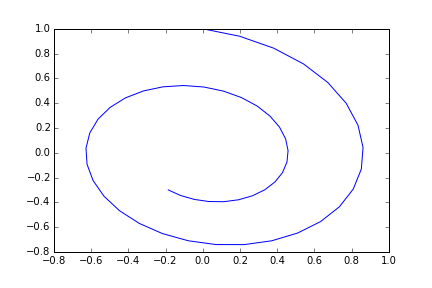 where \(a\) and \(b\) are parameters for which we would like to try out different values. The f function would then be rewritten as

By default odeint calls the function we provide only with the state and the time, which would not work in this case. For such situations, odeint as an additional argument args which takes a tuple which is interpreted as additional arguments to be provided in the call to f. So we could get the same plot as before by executing, with the new definition of f:

Suppose we would like to compare the trajectories for \(b=0.2\) and \(b=0\). We call odeint twice with the two paramter values and then plot both the trjectories in the same figure. 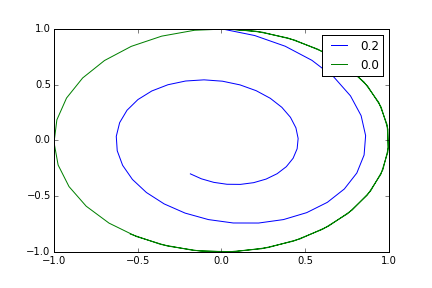 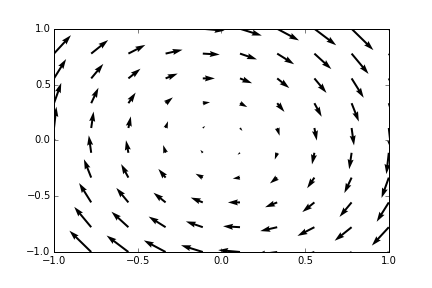 Now the description. The two lines

sets up two equally spaced 1-d vectors of x- and y-coordinates with 10 elements each. But what we need is a 10×10 2-d grid of points at which to draw our arrows. The NumPy function meshgrid does precisely this, taking two 1-d grids, using them to form a 2-d grid and then returning a tuple of two elements the first of which contains the x coordinate at all points of the grid and the second contains the y coordinates at all point in the grid.

Here we have an example of using the extended form of the assignment statement to take apart the tuple returned by mesgrid and assigning its two element to two different names.

Element-by-element arithmetic works for the 2-d arrays xx and yy just like it worked in our earlier 1-d examples. Finally we call quiver

On a single figure plot